This is FIOP. Our writing task is another information report which is based on Hippos. I wrote about their habitat/diet, family/life, and conservation. I read a few articles about this and found some cool and interesting facts. I hope you have enjoyed this post. Please leave a positive comment on my blog. 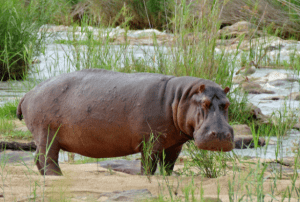 The third largest land animal on earth and native to Africa, the Hippopotamus. This mammal lives on water and land, they live in the South Sarahan, Africa. They can stay underwater for five minutes. Hippos are mostly herbivorous and eat grass (about 35 kilograms) and fruits. Hippos have a large body, short legs, short tali, and a huge head. Hippos weight 1,400kg – 4,500kg and their height is 10.8 and 16.5 feet.

Hippos are in groups with 10 – 30 individuals in it. It is called a herd or bloat. The leader of the herd is a dominant male leader. The rest are females with their younger hippos. Females hippos (who are called called cows) give birth to baby hippos and gather up with other cows to protect their babies. They protect their babies and fight off the predators by splashing water and using their massive size as their advantage.

These hippos are not endangered yet but exposed to extinction. 115,000 – 130,000 hippos are still living in the wild. Due to their habitat loss and hunting, their population went down. Luckily the laws have been restricted and this helped the hippopotamuses population. They also live in protected areas in East African countries.

In conclusion, Hippopotamuses are mammals, water and land animals. They have a herbivorous diet. They stay in herds and have one male leader. East African countries have some protected areas for hippos.

Task Description: Hello, welcome back to my blog/welcome to my blog! This is a FIOP task. In literacy we learnt how to write an information report. Below is my information report on Honduras. I hope you have enjoyed this post. Please leave a positive comment on my blog.

Honduras, a country located in Central America. Honduras has a population of nine point five seven people and the capital city is Tegucigalpa. Honduras is slightly larger than the state of Tennessee and has heaps of mountains.Honduras got its nickname, the Banana Republic, from political science. The term banana republic describes a politically unstable country with a careful management and financial or other support. Their major export was bananas.

Around 5000 BC construction began in Honduras, in what would be Copan (was built by Uaxaclajuun Ub’aah K’awiil and K’ak’ Yipyaj Chan K’awiil), the key city maya civilization. Kings would reign it for centuries and skilled arctics and sculptor would call it home. Honduras broke away from Mexico in 1823, Honduras finally became completely independent in 1839.

The Hondurans (also known as the people of Honduras) are a mixed race, Spanish, also mainly from Andalusians, Galicians, and more. The traditional clothing in Honduras is made handmade, mostly from white fabric and sowed with colorful designs. Women wear sleeveless dress, usually with a cloth worn around their waist like a belt, while men wear white pants and a white shirt, also sowed with colorful designs.